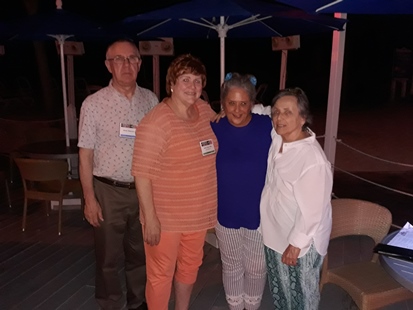 Hello! Did you think I had run away? Well, in a way I had. 2020 has been a very strange year, hasn’t it? I took some time off from writing, explored new things, did some political activism, did some things around the house, did some traveling (yes, traveling in 2020 – more later) and really re-thought my commitment to writing, whether I wanted to go on with this very unrewarding career.

Of course, writing won, even though I am at retirement age. I decided I’m going to give it one more chance and see if I can have the career of my dreams. (So please buy my books!) Plus, I hate waste and I have five full novels, edited and ready to go, sitting on my desk, curtailed only by my criminal accidie. They deserve the life of being published, so watch for news of new releases over the next month or so.

There have been some losses in the last year or so. A very dear friend passed away. My stepdaughter and her family moved halfway across the country. On the plus side, The Husband will be retiring (finally!) in early January. I think he put it off so long because he knows his ‘honey-do’ list is reaching War and Peace proportions!

Now, since I have so little writing news to share, I’ll tell you about our travels and non-travels. We were scheduled to go to Germany in October for the incredible Munich Gem and Mineral show, even though it had been severely truncated by this dratted plague. I was looking forward to going back to Germany – one of the most beautiful and nicest countries in the world – but they suddenly closed their doors to international travelers. Then the show itself was cancelled outright – the very first time in its lengthy history. I feel so bad for Christoph, its owner/manager and a dear friend. However – there is always next year! (Please, God!)

In late September we did manage to get to the NINC conference in St. Pete Beach in Florida, and what a courageous, sad, brave little conference it was. In January there were 400 paid attendees; when we got there in September that had dwindled to 46 – maybe 48, I don’t remember exactly. Instead of four tracks of lectures, there were two, and half of those were virtual. (I hate virtual!) Still, it was a fascinating conference, and created a bond between us hardy souls that is wonderful, even if we did wander around quoting the St. Crispin’s Day speech from Henry V a little too often! I did get to see my BFF Sally as we do every year, and had a lovely dinner with her and her partner. 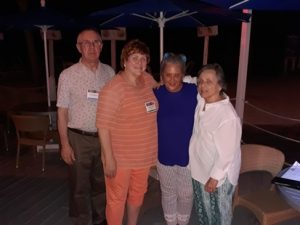 The Tradewinds Hotel bent over backwards to take such good care of us, and the breakfast waitress told us we were the first conference to come back since the plague began and how grateful they all were. I’ve already made our reservations for next year’s conference, and will pay for the conference for The Husband and me the first day registration is open. (And I do believe that those of us who were loyal enough to come this year should get preferential registration consideration for next year! Are you listening, NINC???)

On the way home from we detoured by Stone Mountain, which is near Atlanta, Georgia, wanting to see the monumental sculpture before the vandals and culture-destroyers get their filthy hands on it. The Husband had never been there; I hadn’t been since I was about six, and no, I am not going to tell you how long ago that was. Just know it was a looooooong time!

The mountain itself is one huge granite rock, one of the three largest in the world. Ayres Rock in Australia is bigger, and there’s one more I don’t remember, but Stone Mountain is ENORMOUS. When I was there at the age of six it was also pretty plain. There was the mountain, a terrace for viewing, and a shack that was ticket office and souvenir stand. Now there are a myriad of terraces where the locals hold all sorts of events and festivals. There was a pumpkin festival scheduled, complete with a two-story high construction of pumpkins on one of the terraces, but nothing going on because it was raining cats and dogs. Yes, we went all over the place in the pouring rain. Now there is a state of the art ticket booth and souvenir stand and a gondola lift that takes you right up the mountain, going really close to the sculpture, up to another souvenir stand/snack bar/museum on the tip-top. You can even walk out on the rock itself – the view, even in the rain, is spectacular. It is not only a beautiful work of art, it is an astounding feat of engineering.

When I was first there my daddy bought me a small chunk of the granite from the mountain itself, with a little silver plaque on it, to remember it by. I still have it, but was going to buy another as a present for The Husband. No luck! They don’t do that any longer. All they had was a lot of costly cheap t-shirts, caps and sweatshirts and plastic stuff. As we were soaked to the skin from going around for hours in the rain, we both bought sweatshirts and changed into them in the parking lot! Thank goodness it was almost deserted.

The sculpture itself is so incredibly impressive! It covers over three acres of almost vertical granite. When it was finished in 1926 or 1927 there was a great celebration, with all kinds of local and national political figures and governors of nearby states. They even held a banquet for 15 or 20 of them – on the shoulder of the middle figure! There was a big wooden table, crystal, china and linen napery, even white-jacketed waiters! They had built a temporary staircase down from the top, and the construction catch-scaffolding below the sculpture was still in place, but still…! The idea of climbing down that sheer cliff to sit and eat on the shoulder of a carved figure hundreds of feet in the air makes me lose my appetite even now! 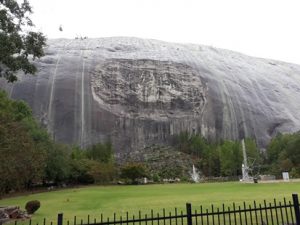 We hope to go back next year and will budget more time to spend there. Hopefully it won’t be raining!

Before that, in June, we went to Saint Augustine, Florida for the Sons of Confederate Veterans conference, set in a town called World of Golf. True! Stores, housing developments (some houses there are $5 million and up!), condos, restaurants and a world class hotel, all dedicated to golf. I don’t get it, but still had a wonderful time, as The Husband and I are compulsive history buffs, and it’s so great to be among others who are as history-minded as we are.

There were so many lovely people there and I was delighted to meet them. Here I am with Gregory Newson, proud descendant of a Black Confederate soldier, a delightful raconteur, author of several fascinating books about Blacks in the Confederacy and guiding genius of Uncle Gregory’s Coffee, which is just about the best coffee I ever put in my mouth! 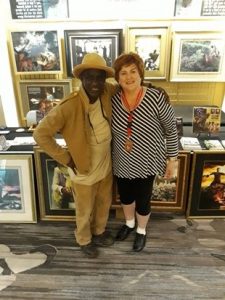 We had lectures on battles and international situations and (I’ll admit it) I even went to a seminar about contemporary costume. I can’t imagine wearing all that clobber, but some women even wore such costumes to the conference! (I wore pants – nice pants, but still pants, even though I felt thoroughly underdressed!) Here’s a look at the Grand March held during the closing banquet. 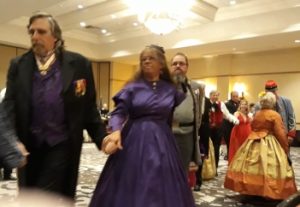 Wish I had space for more pictures – the gowns (modern and costume) were fantastic!

The Husband and I did sneak away (as did some other attendees) to take several tours of Saint Augustine. Neither of us had been there before, and it is a lovely town. I’d love to go back and explore more slowly and in depth. All in all, it was a wonderful trip.

Two trips to Florida in a four month span… Never done that before, and the funny thing is that I’m not all that fond of Florida to begin with! Too hot and sandy. Still, both trips were wonderful and I’d go again in a heartbeat.

However – all good things aside, 2020 was a heartbreaking year for my career. Remember I announced that I was going to partner with the American Research Center in Egypt auctioning off naming rights to three characters in a novel I would write – the money would benefit ARCE and they would benefit me with two years of publicity in all their media channels and others. Sigh. It was a wonderful idea. I was to the point of working out my wardrobe schedule (have to look like a glamorous successful author, right?) when two weeks before the day we were to leave for Toronto the conference was cancelled because of this dratted (I’m thinking a much stronger word, by the way) plague. In a poor simulacrum of itself the conference was held virtually, but the auction was deemed impractical in a virtual setting and called off despite an incredible amount of interest.

ARCE is an international non-profit and in the ways of far too many non-profits the staff turnover is high. The sweet child who came up with the idea left and the Powers That Be decided that the idea was dead forever. Sigh. The biggest opportunity of my career and it was a casualty of the virus. (My opinions on the virus and the reactions to it are not fit for public pixilation, so I won’t say anything more.)

Anyway – that’s my year. Hope that yours has been better, and that you and yours are staying safe and well. I’ll be posting more often now, so check back to see what’s up. And please – buy books!