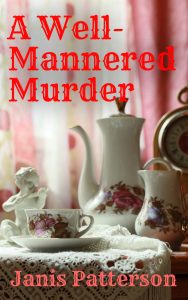 The murder of a mysterious woman.

Fledgling researcher and newly single Mindy McMann just can’t catch a break. She might not even live.

Mindy McMann’s life has gone upside down. While divorcing her cheating husband, she has to maintain good relations with her teenaged son, convince her overprotective mother that she is not going to move back in with her, and find a way to support herself. Non-fiction author and decided eccentric Darryl Knedsyn offers Mindy a job as a researcher for a book about the long-defunct Miss McCallum’s College of Charm, which seems absolutely perfect… until the underground vault at prestigious Carlisle College where she is working in the charm school’s archives is broken in to. Perfect until a mysterious unknown woman who bears a strong resemblance to Mindy is brutally attacked in the archive storage area. Perfect until Mindy is accused of her murder.

Without knowing how it happened, Mindy finds herself the target of mysterious people who for reasons she doesn’t understand mean her harm. Then she discovers the Kennedy connection, and things get really dangerous.

There was a strange young woman working the desk and Sophronsiba nowhere in sight. She looked suspiciously at me when I asked for my keys and demanded to see identification before she would hand them over.

“Where’s Ms. Higgins this morning?” I asked while affixing my signature to the sign-in sheet. Pretty soon this one would be full. My name, repeated over and over again in a single column.

Her eagle eyes didn’t miss a single pen stroke. “Ms. Higgins is having a meeting upstairs,” she murmured, staring so hard at my signature that I feared she might want my ID back for comparison. When I wrote down the time, she glanced at her watch. I hoped our watches were synchronized.

“Well, I’ll see her later.” I didn’t even try to smile at her as I left. After forty every movement of your facial muscles puts you that much closer to wrinkles, and I didn’t want to waste that tiny bit of elasticity on her.

Taking the keys I unlocked the elevator and rode down. It was cold in the vault; how crazy – close to 100F outside and in here I was glad I kept a sweater draped over the back of my chair!

I unlocked the vault gate and turned on the lights – all of them.

The McCallum vault was at the far end of the main aisle, straight in front of me. Even from here I could see that the wire gate was open. My heart began to pound.

I was halfway down the aisle before realizing that what I had thought was a shadow was in actuality a human leg, flat on the floor and twisted at an odd angle.

Attached to that stocking-clad leg was a woman jammed ungracefully into the tiny space between my worktable and the closest rack of shelving. A rack of shelving that was glaringly empty. On the other racks all the storage boxes had their lids either ajar or tossed off altogether and there were little islands of ledger books and files in neat stacks on the floor as well as papers casually tossed around like scanty snow.

I didn’t see any of that, not after the first glance. All I could see was the back of the woman’s head, her hair slick and shiny as if it had been coated with plastic. What set me to screaming, though, was the small spreading lip of liquid red radiating out from beneath her head.

Buy it on Amazon