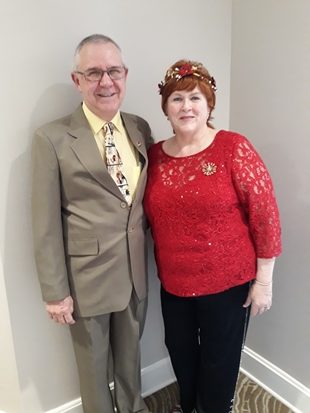 Isn’t it amazing how often good things happen in tight clusters? First of all, Hiram, aka The Husband, and I attended the NINC conference in St. Pete Beach, FL again – our sixth one – and it was marvelous. Exhausting, but marvelous. Held in the incredibly luxurious TradeWinds Resort, our room overlooked the Gulf – here’s a picture from our balcony. The conference is wonderful. An organization of working professional writers, NINC (Novelists, Inc) puts on the best conferences! This was our largest gathering ever – 273 members, 42 authors’ assistants (Hiram is mine!) and 62 industry professionals, representing just about every aspect of the publishing world. The workshops started at 9 in the morning and the last Night Owl (members-only discussion groups) ended at 10 at night. Throw in some memorable industry-sponsored parties, a couple of delicious banquets (including a blow-out end of conference banquet on the beach at sunset) and the chance to see old friends one hasn’t seen since the last conference and everything is just about perfect.

Speaking of old friends, the fantastically talented actress Sally Bondi – my BFF for close to 40 years – moved to Florida years ago and we manage to see each other at least once every NINC conference. Now to show you just how close friends can be even though we live half a country away from each other we didn’t discuss anything so mundane as what clothes we were going to wear, but somehow we both showed up in black and white stripes. Believe me, we looked as if we were auditioning to be a test pattern! To the delight of everyone at the conference, it was announced at the AGM that we had just signed a new contract with the TradeWinds guaranteeing our conference would be held there through 2025! It’s a great and very beautiful place, and the staff is incredibly friendly and helpful. Hiram and I always try (though we don’t always succeed) to build in some ‘shoulder’ dates around the conference and thus make a mini-vacation out of it.

Hiram always likes to fly everywhere we go; most of the time if it is at all practical I prefer to drive. While I love the act of flying (preferably in a small plane), of being so far above the earth that you can dance with the clouds, I loathe flying commercial. I just don’t like being treated like not-too-bright, self-ambulatory cargo! Flying commercial hasn’t been pleasant in a long time. So we drove to St. Pete Beach – two days each way, almost exactly 2,500 miles round trip. I think it was worth it; an easy drive with lots of beautiful scenery to look at, the freedom of having our own car while in Florida and the ability to take with us what we want. (I sleep best on my own little buckwheat pillow, and it’s just too heavy to take on an airplane!)

So – we arrived back home LATE on Tuesday night, went to an SCV meeting Thursday night and Friday morning left for Nacogdoches, a lovely town in East Texas about 3 1/2 hours away. The United Daughters of the Confederacy was having their state convention there, and they honored Hiram with a medal honoring his military service – 32 years in the Navy, retiring as a Captain. (Can you tell I’m proud of him?) Here’s a picture of us at the pre-ceremony banquet. I love my outfit (it’s all sparkly, but the photo doesn’t show that) and bought the little hair ornament specifically to go with it, but am thinking it makes me look a little too much like Tatiana, Queen of the Fairies. What do you think?

Anyway, it was a splendid ceremony. There were seven honorees, including a WWII veteran, and his son who is a Viet Nam veteran. I admit to tearing up a little as all the commendations were read. Every one of those men are so incredibly brave and risked everything to serve their country. Kudos to them!

Now, we have barely gotten home – I haven’t even had time to finish all our laundry! – and not only do we have one of my high school reunions to attend, we’re off to Munich in a couple of days. The owner of the Munich Gem and Mineral show – arguably the largest mineral show in the world – is a friend of Hiram’s and he sent us VIP passes, so of course we have to go. We’d probably go anyway, but being included in the parties and private showings is really something special! Will take pictures and tell you all about it when we get back.

And I want to ask a favor. For the past six months I’ve been in negotiations – yes, even during the times I was so beset with illness – for a Very Big Project, something more spectacular than I’ve ever done. (No, I’m not going to tell you any more right now, because I don’t want to jinx it!) It’s getting very close to becoming a reality but still could fall off the table at any time, so I’m going to ask you to say a little prayer that it works out. You know I’ll let everyone know one way or the other when it’s all settled. Thanks!