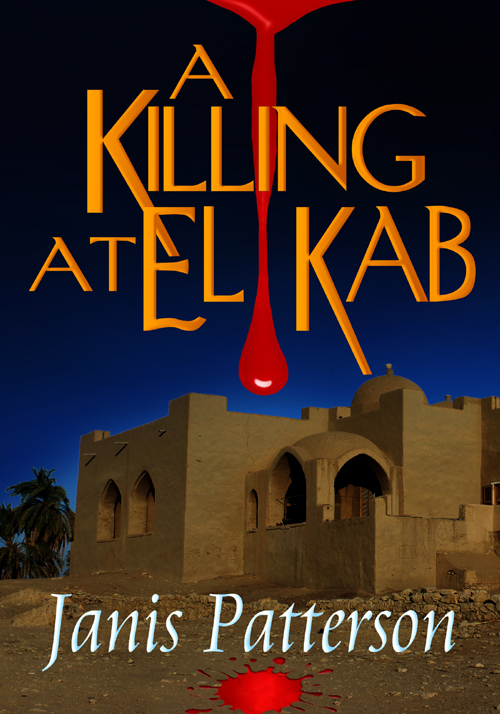 An Intercontinental Appearance… and a SALE!

Okay, okay, I know I’m late with this, but just wait until I tell you why. I wanted to wait until it was over so I could tell you all about it. At my age – and with the life I have lived – it isn’t easy to say I have just done something I have never done before, but that’s exactly what’s happened.

Last November I was told that my friend Dr. Dirk Huyge would be speaking at a literary evening held by Boekhalter Kleine Johannes in Louvain (the university town of Belgium) about digging in Egypt, the current activities of the El Kab excavation, and how he ended up in my book A KILLING AT EL KAB. The date was for 8 December. What was coolest was that I was invited to appear by Skype! (Of course The Husband and I immediately looked into going over there for the event but the cost and logistics were just so far beyond our means it wasn’t funny. Still, we HAD to ask…)

Well, sadly the date had to be put off because of an unexpected death in Dirk’s family, but it was reset for Wednesday, 8 February. One-thirty my time. (Don’t know what time it was there, because I’m not good with things like that.)

I had been in email contact with Mr. Luc Vander Veden, the charming owner of the bookstore, and we agreed to a Skype test at ten thirty in the morning. Well, it turns out that he knows as little about Skype as I do – which is saying quite a lot – and though we both had each other’s Skype addresses, I found we could not connect unless we honored a friend request. Well now, how was I supposed to get a friend request if I couldn’t contact him by Skype?

Well, y’all know me. I can be stubborn on occasion. (That faint, slightly hysterical laughter you hear is coming from The Husband…) I emailed him. And as time ticked along, I emailed his two other addresses, Dirk at two of his addresses, and the bookstore itself, along with a few other names I had picked up along the way.

Well, it all worked out okay and we got connected. Sort of. Luc and I had set a time for him to call. The Husband and I were ready, but the call didn’t come. And didn’t come. And didn’t come. I tried to call in, but couldn’t get Luc’s machine to pick up. So we sat. And eventually he called – apparently the shop had only one laptop, and Dirk had to use it for his presentation, so we didn’t get to hear his speech. Which, he told me later, was all right, since he was speaking in Dutch, and neither The Husband or I speak a word of Dutch.

Luc was afraid his English would not be good enough to interview me for the program (though he did fine in our email chats) so he contacted Professor Gray Swicegood, a very nice American professor from the University of Chicago currently teaching in Louvain, to do it. What is funny is that he got his advanced degree at a university about 90 miles from me, right here in Texas! It is indeed a small world…

The interview went well, though it was shorter than we had expected. I wondered at that until I realized that by the time all was over it was close to midnight in Belgium! The two main questions were about how I came to choose El Kab as the place to set A KILLING AT EL KAB (I didn’t choose it – the wheels were set in motion back in 2010 by a totally chance stop at the El Kab necropolis going back to Luxor after a day’s sightseeing at Gebel-el-Silsilla, which resulted in a book called THE EGYPTIAN FILE, which led eventually to a treasured friendship with Dirk and A KILLING AT EL KAB) and how Dirk ended up as a character in the book (to which I answered Why not – he’s charming, erudite and fascinating!) There was even a question of whether there will be another El Kab book – I really didn’t think so, because the cast of characters was so limited and brought together in such a unique and non-lasting way, but after some urging during the show a plot began to creep in around the far corners of my mind. (A writer’s mind, as I told the audience, is a strange and fearsome thing…) You see, there’s an adventuresome archaeologist named Dirk Huyge, who is contacted by a bookstore owner named Luc Vander Velpen who has found a strange tome about a lost tomb… I haven’t decided if there will be space aliens in it or not, but it will be great fun. If I ever get around to writing it. I am making notes, though, and keeping them in a file called ANOTHER KILLING AT EL KAB. More later…

Now – I promised you a sale, didn’t I? Well, to celebrate Valentine’s Day – and the Belgian program, the ebook version of A KILLING AT EL KAB is going to be on sale for $1.99 from 10 February to 18 February – four days on either side of Valentine’s Day, so you have no excuse not to buy it for all your Valentines! AND… because I can’t do something for my Janis Patterson readers without doing something for my Janis Susan May readers, I’m going to put CURSE OF THE EXILE on sale for $1.99 for the same days. (That’s a traditional Victorian Scottish Gothic Romance, with a dilapidated castle, a mad ghost, a revenant from the past and two handsome gentlemen both interested in our plucky heroine, a librarian’s assistant. Great fun!)

So – until the next time, take care of yourselves, and buy a couple of books. Preferably mine, but all books are good to have. Don’t when the next Newsletter will come out, but it won’t be until there is something worth mentioning going on. Remember – I did promise not to flood your mailbox!

Happy Valentine’s Day, everyone. Hope your Spring is simply splendid!