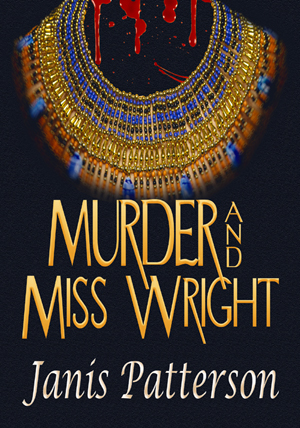 Lily Wright doesn’t care a thing about Ancient Egypt, but she does care about Peter Monroe. Lily thinks the trip to a scholarly conference sounds delightfully romantic – until they run into a predatory ex-girlfriend, an obnoxiously exuberant archaeologist and his mousey wife, a scholar who is convinced he is an Ancient Egyptian priest and a souvenir seller who may or may not be dealing in smuggled artifacts. When three murders are committed and Peter is arrested for them, Lily knows she must find the real killer – if she can stay alive long enough.

“There are always bad people, Lily. It’s just hard to accept that they are someone we know.”

Shivering, Lily pulled away and stood before the dresser. She picked up her brush and began to pull it through her hair mindlessly, without even bothering to count the strokes. “At least they can’t blame Megan’s death on Gerda Bone. She’s in the hospital, and they won’t tell anyone anything about her condition,” she added with angry indignation.

“Gerda couldn’t have done it anyway. She’s too frail. She could have had an accomplice, though, and then it wouldn’t matter if she were in the hospital or not.”

Although Lily didn’t like it a bit, her mind immediately flashed to Toby Don Holder. He wasn’t particularly muscular, but he would probably more than capable of beating up a thin young woman like Megan Waterman. He would also do anything at all Gerda Bone asked of him.

“I know.” Peter smiled wryly. “You’ve spent most of the day telling anybody who’d listen.”

Lily stuck her tongue out at him. “I don’t know how Gerda felt about Megan Waterman or if she even knew her, but for someone as much in love with her husband as she is–was–is, how could she have?”

“Love can breed hate. How often does one spouse kill another?”

“Not Gerda. She just lay back and let him walk all over her!”

“Maybe she had enough of it. Even worms turn, you know.”

“I’d rather think it could have been one of his other wives…” Her hairstyle completely destroyed, Lily laid down the brush and began creaming her hands.

“Wives? What wives?” Peter asked, then said, “You know you look like Lady Macbeth when you do that.”

“I knew about Dr. Ramsgate. Did Tyrus have another ex?”

Peter looked startled. “Dr. Griffiths? She’s just about the foremost iconographer and art historian working today. Who told you she had been married to Tyrus?”

“Zale Redding. He had just rescued me from Arthur Stern.”

In spite of himself Peter chuckled. “Poor baby. Was he wearing his Tut mask?”

“No, his bookseller hat. He wanted to take me upstairs and sell me his two books–at ninety dollars apiece, no less.”

“If I were going to take you upstairs I wouldn’t bother about books,” Peter said and with a grin pulled Lily back against him.

“In case you hadn’t noticed, we are upstairs.” Lily slipped into his embrace.

“So what are you going to do about it?”

“What do I always do about it?” With delicate precision Peter began to nibble on Lily’s ear.

“What about dinner?” Lily’s imp of perversity asked.

“That depends on what we want to eat...” Peter’s lips slid from her ear–moving carefully around her somewhat spiky earrings–and down the column of her neck. “We can always have room service later.”

“Now I remember why I love you…” Lily started and stiffened in Peter’s arms. “What’s that?”

“I heard something… it sounded like it came from over there.” She pointed in the direction of the vandalized room.

For a moment they even stopped breathing, then Peter said with the utter reasonableness of a man who never heard unexplained noises, “From there? That’s locked up.”

“I was sure I heard something…”

“This is a hotel, honey. There are always unexplained noises. Now,” he said in a completely different tone, “you were going to tell me why you love me…”

“Because you’re so predictable,” Lily said, but with a completely different connotation from her first thought.

“Funny…” Peter’s lips resumed their nibbling down the length of her neck. “No one ever told me predictability was sexy…”

Lily drew and exhaled a deep, ecstatic breath. “There’s a lot we women don’t tell.” Using her last bit of willpower she pushed him back. “Give me a minute to freshen up, will you?”

Kissing him impudently on the nose, Lily turned toward the bathroom. She had barely closed the door and turned on the water when a blast of noise erupted. First a muffled shouting, then a crash, then a solid thunk, then an odd, heavy slither.

Surely, Lily thought as she dashed back into the bedroom, Peter had to have heard that!

Peter had heard, and more. He looked up uncomprehendingly at Lily, but Lily didn’t comprehend either. The connecting door to the other room, the door that Peter checked every night to be sure was locked, was open. There were splashes of glowing wet red on the floor, splashes that looked horribly familiar to Lily. Peter sat sprawled in the center of the room, his arms clasped around Salim Mafouz’ chest. Mafouz’ face was oddly flattened and misshapen beneath a rising spring of blood. He was also very obviously dead.