Castle In the Clouds 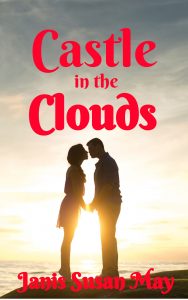 Bethany Stubbins has just inherited a ranch and a fortune, but she has also lost a fiancée. Now even though all she wants is to be left alone so she can decide on the rest of her life, she has to deal with a ridiculously sexy archaeologist who wants to search her land for an undiscovered pueblo. Her scalawag great uncle has decided that the ranch and the monies that go with it belong to him, and he’s not too fussy about how he will get them. Then Bethany’s former fiancée, now gratifyingly loving and repentant, appears and wants her back. What is a girl to do?

The rock next to my leg exploded, sending out shards of stone big and sharp enough to be painful even through my jeans. Within a heartbeat Dr. Jackson had me wrapped tightly in his arms and had rolled both of us back over the wall – too close to the snake’s head to be really comfortable, but just as I opened my mouth to ask him what the heck he was doing another rock exploded above our heads, spattering rock dust and chips into my mouth. Immediately I spat them out before thinking that in doing so I was covering the front of his shirt.

“Who?” I whispered in a voice barely louder than a breath.

“Shooting?” I shrieked, too startled to remember to whisper.

Looking back, what he did made sense. It was a matter of logistics, not passion, but it certainly didn’t seem so at the time. His arms were occupied trying to hold me down; his legs were wrapped around mine to keep me from thrashing. All that was left were his lips, and did he ever put them to good use.

His mouth pressed against mine, firmly and almost possessively in a fine counterfeit of a real kiss. I couldn’t breathe, but it wasn’t from the pressure; no, it was almost as if a weird form of electricity had taken possession of me, encapsulating my body in a form of timelessness. The relentlessly cynical, practical part of my brain kept saying that this was nothing but a form of gag, that he was just silencing me, but the physical, reactive part of me kept ignoring that and just enjoyed the situation. Lordy, what would it be like if he were kissing me for real? It was all I could do to keep from passionately kissing him back.