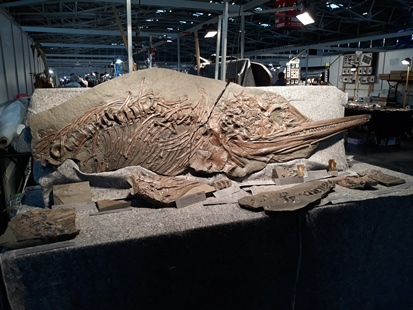 Well, we’re back from the justly fabled Munich Gem and Mineral Show and we’re exhausted, but it was worth every minute. You cannot believe how big the show was – five display halls, each of which felt larger than a football field, each absolutely stuffed with vendors, exhibits, and activities. We were told that the exhibition area was over five acres under roof – and all brimming full! There’s no way a simple camera can capture the scope of the Show, especially from floor level, but here’s one attempt – And for those of you Dr. Who fans who have a slightly warped sense of humor, I found out what happens to retired Daleks… they take work as trash cans in Germany! Sorry this picture is a little blurry, but I was laughing so hard… This was our first visit to the Show and The Husband was so excited he couldn’t wait to get there. Christoph Keilmann, CEO and presiding genius of the Show, had been so very kind as to send us VIP passes which allowed us in at any time, so we walked in at 9 am on set-up day. Only about one-fifth of the booths – if that many – were open for business; others were in various stages of setting up and some were just empty stalls. The energy was frenetic. The floors had been covered with heavy gray plastic. We walked knee-deep in drifts of packing material and dodged cars and vans delivering merchandise to the various booths. It was both weird and exhilarating to watch sophisticated display booths emerge from nothingness and to see treasure after treasure being pulled from swaddling paper. All I can say is the various shipping and cartage companies around the world must love the Show, because there was so much stuff, and so much of it heavy. I can only imagine how much it cost to ship the merchandise and exhibits. I found an onyx lamp I simply adored, but not only could I not afford it, I couldn’t even lift it!
At the first open booth that first day I bought a couple of pieces of stone jewelry (jewelry – yeah; you know me!) for just a couple of euros each. My new favorite is a simple bracelet of quartz plaques with inclusions of black tourmaline, with the plaques being about one inch by half an inch. Simple and sophisticated and very easy to wear. Also bought a bracelet of three-quarter inch balls of tiger eye; gorgeous and dramatic, but not at all easy to wear.
One of the nicest things about the Show was how friendly everyone was, no matter where they came from. I met a lovely pair of men from Belgium from whom I bought a (replica) Aztec mask of copper and crushed jade. Beautiful! (Though I do seem to have a penchant for buying definitely non-German stuff in Germany – remember at last year’s Christmas market I brought home a stuffed crocodile!) The Husband was interested in German fossils and bought several from a couple of people, each of whom had done the actual finding of the specimens. I met so many lovely people, including my new BFFs, Tara Haymore (blonde) and Jesslyn Scott (brunette) who work for New Era Gems out of Grass Valley, California. Even by today’s standards it’s still pretty fascinating to watch the mechanized figures dance and armored knights do a joust on prancing horses just as they have for the last four hundred years or so, but when it was new it must have been near miraculous to the townspeople. I could watch it every day.
Our last day we didn’t go to the Show; instead we went to the State Egyptology Museum, and it was so wonderful! Well, at least partly. The building is in the heart of the museum district and if it is not the ugliest structure ever made, it is at least in the top three. Made of uncompromising slabs of grubby gray concrete, it looks as if it won a ‘worst of show’ prize in Soviet-era architecture. No kidding – it is truly awful, but once we were inside the artifacts made up for it. Just take a look at the sculpture hall, the first display in the place. Every single artifact no matter how large or small was spectacular and displayed and lit beautifully. It was just a pity the building itself was so hideous!
One last note – our entire time in Germany, from the time the plane landed until the plane took off to take us home, we did not ride in a car, or even a bus. We took the underground everywhere, or we walked. And walked. And walked. I am hoping to feel my feet again any day now.
Ever notice how things come in herds? First there was NINC, then The Husband got his medal in Nacogdoches, then Germany and then Bouchercon… Yep, we got home from Germany at 2:30 Tuesday morning and went to the mystery conference Bouchercon at 8:30 Thursday morning. Needless to say, we’re even more exhausted!
I didn’t make the cut for any of the panels for which I asked, but I was given the moderator spot on a panel about how to use social media. Of all the parts of self-publishing I am the absolute worst at social media! Luckily, I had a great panel – Colin Conway, Tom Crowley, Jeffrey Eaton, Julia McDermott and my darling friend of many years, Barb Schlicting. Thanks to their expertise – and a great audience who had lots of questions – it was a wonderful experience. Here’s a picture of us, all except for Jeff, who couldn’t make the picture session. Well, that’s about all from here – and isn’t it enough?? This has been a wild month, and now I’m looking forward to settling down to some writing.