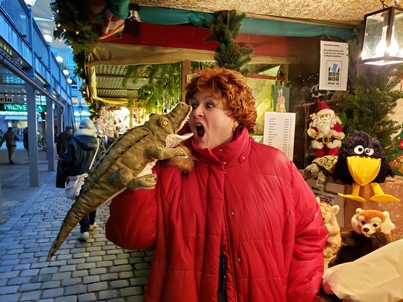 First of all, this year was much less cold than last, with only a flurry or two of snow instead of feet of it piled up. To say nothing of ice, for which I was very glad. I’m from Texas – we put ice in our drinks, we don’t walk on it!

We landed in Stuttgart a day early, hoping to rest up after an exhausting flight and hopefully prepare for what we knew would be a strenuous amount of walking. What we found was the previous tour (there are three sequential tours of one week each) waiting to go to the Esslingen Medieval Market. We had tried to go last year, but incredible cold and torrential rain insured that we only stayed a few minutes, so we went with the first tour. The market was great fun – people in medieval costumes, medieval-style games (taking a cardboard castle with miniature trebuchets shooting beanbags, mouse roulette) and even a ferris wheel about ten feet tall and having six baskets in which a child could sit. The wheel was about 15 feet high, made of ancient-looking 4x4s and turned by hand.

The next day our tour started out – it was a small group, just The Husband and me and two lovely ladies named Lori and Marsha. And the guide/courier/driver/owner/whatever, a lovely man named Ben Gaumer, a dear friend, retired Naval admiral and doctor. Ben’s company BGAdventuresLLC.com (go to the website and check out the archives to see fantastic pictures and videos – better than I could ever take) runs German bicycling tours in spring, Oktoberfest tours in October and Christmas market tours in December. Can’t recommend this company enough.

Anyway, we went to the Lindenhoff, a tiny jewel box of a palace built by Ludwig, the Mad King. Yes, the one who built Newschwanstein, which we saw last year. Love that place! Let me get a toothbrush and I’ll move in… yeah, like that’s ever gonna happen!

From there we went to Fussen, where we went to one of the tiniest markets we saw. Unfortunately, this year we were in the second tour (the first was full when we booked) and we missed the Krampus parade. Sigh.

The next day I sat writing in a lovely hotel coffee shop at the base of Neuschwanstein hill. Above me the castle rose in fairy-tale splendor… at least, it’s supposed to. Then it was raining exuberantly and the clouds were bare feet above my head – to enable them to drench us more efficiently, I presume.

Ben, our courier and dear friend, went to get tickets for those who wanted to tour the castle. The Husband was out prowling around behind the castle looking for atmospheric (i.e., cloudy and wet) photographs. In the rain. He who at home puts on a poncho and huddles under an umbrella at the slightest sprinkle. Lori and Marsha had not seen Ludwig’s phantasmagorical archetype of a palace/castle and were determined to go up. I’m proud of them. Everyone should see Neuschwanstein at least once.

Last year it was bitterly cold – many degrees more so than now – but the sky was clear – brilliantly blue with only a few handkerchief-sized scraps of cloud. Beautiful! You could see for miles across the undulating Alps.

The road from the valley (which is populated with cafes and souvenir shops) to the castle is a steep series of switchbacks. The view is spectacular, but it’s a looooong climb. A very long climb, and very steep. Another reason I decided to spend the morning in a warm cafe with a large cappuccino!

In spite of the glorious weather last year my physical infirmities dictated we take the horse cart up the hill. The horse cart ride is lovely, but it only takes you about 3/4 of the way up. After that it is too steep for the horses, so you must struggle on by foot. This year you have your choice of walking, the horse cart or a bus. The bus can take you higher, but even it cannot take you all the way to the top. You still have to walk a couple of hundred yards. One wonders how Ludwig did it. I cannot see that spoilt and sybaritic king hoofing it up the last stretch to his palace. And how the heck did they get all the building/decorating materials up there? The mind boggles.

Germany is a country of stairs – it seems that whatever you want is either up or down at least one flight. Neuschwanstein is the absolute apogee of that. There were five long flights of stairs on the tour, and six down. You come out one floor lower than you went it. About halfway through last year’s tour I almost decided that they would have to adopt me, as I couldn’t do another step! I did, though, but it would have been nice to move in. With all his ‘modern’ things in the castle – a call system and even a sort of computer – I don’t know why Ludwig didn’t have an elevator!

One of the most endearing things about Germany is it is unabashedly and joyous in its celebration of Christmas! Everywhere you hear – and say – ‘Merry Christmas!’ (or its German equivalent, which although I can say with a reasonable accent I’m not even going to try to spell). The streets are decorated with banners and tinsel, many of which proclaim Merry Christmas! (None of that so-bland-it’s-meaningless ‘Happy Holidays.’) In shop windows there are Christmas displays, but not the secular ones of Santa Claus and elves and reindeer. There are exquisite Nativity scenes and beautiful crosses – and yes, some Santas, et al, but even they are done tastefully. Also about half the shop windows would have menorahs and dreidels and a couple of other Jewish things that I don’t know what to call, all set right beside the Christmas display. One thing I noticed is that there are none of the big blowsy plastic blow-up horrors that infect our country. I don’t think I saw more than four during all our time in Germany and they were all for commercial establishments. Home decoration consisted either of large Nativity scenes or of wreaths and garlands of evergreens, usually with beautiful red bows.

All the Christmas markets were fantastic, and each different in their way. With the exception of Stuttgart, all the towns were fairly small – Fussen, Garmish, Reutte, Regensburg (where the oldest operating restaurant in the world is located – since 1153), Nuremburg, Bamberg (where I fell so badly and damaged my shoulder in 17, and in 18 found a wonderful tiny shop that sells my beloved Birkenstocks at about half of what I’ve found anywhere else), Rotenberg (my spiritual home) and back to end up at Stuttgart. We saw Walhalla, an impressive Greek style building (the image of the Parthenon, except not damaged). We saw the exterior in 17, but it has strange hours so 18 was the first time we saw inside. It’s exquisite and filled with busts and statuary of famous men and women from German history. I could literally spend days in there! In Regensburg we had a big dinner with some members of Ben’s family and it was delicious. We ate in a restaurant that had begun life as a 1500s monastery refectory room – the atmosphere and the food were superb!

The Christmas markets were the same – tempting and charming and just full of stuff! No matter the size of the market about half the little sales huts are food places, with all kinds of good German food. I had to learn to pace myself, because after 17 it was almost March before I could face a bratwurst again! In 18 I ate different things – including a goulash meat stew that was superb! Of the food places, about half are candy. I love marzipan and… yum! Just yum! Marzipan in every shape and flavor you can imagine. Marzipan loves me, too, staying around to hang on my hips for years!

Europeans don’t wear many bright colors, at least not in coats. Every once in a while you’d see a single flash of yellow or red or bright blue, which was more than during my first visit back in the 60s, but still most everyone wears navy, or grey, or brown, or black. Well, I like bright colors and after freezing to death in 17 in an inadequate coat I bought a puffy parka for 18. A bright red puffy parka. Of all the people in the group I was the only one who was never lost – you could see me for miles! I really rather did look like a giant mutant tomato prowling the aisles of the markets. (And I did meet one lovely Austrian woman who had my exact same coat! Exactly!! Except hers was several sizes smaller…)

We didn’t buy many souvenirs – a couple of embroidered tablecloths for family Christmas presents, half a dozen bags of German gummi bears (apparently they have different flavors over there) for my stepdaughter, some books for The Husband… and a crocodile for me. I saw this beautiful handmade crocodile hand puppet as the vendor was packing up her booth and simply Had To Have It. (Doesn’t everyone bring home a crocodile from Germany?) In 17 we were able to go to the top of the Zugspitz, the highest mountain in Germany; the view was spectacular. In 18 we didn’t even attempt it, because the clouds were only a few feet above our head and the wind was high enough to make taking a cable car to the top almost suicidal. We wandered – both as a tour and individually – through the streets of ancient towns. We walked until my feet almost fell off. The Husband and I spent hours in the porcelain museum located in the old town gate in Bamberg. I plotted a book to be set in the medieval, fairy-tale town of Rothenberg. It’s a romantic suspense called House of Gargoyles. I hope to have it done before the end of the year. We looked in antique shops – I fell in love with a low, platform-type flow blue porcelain cake plate (have always wanted one) in an antique shop and decided that I’d price it, deciding to go up to $50 or $75 (a fabulous sum for me for a cake plate) because I wanted it that much. I’m glad I don’t faint easily, because it was from some famous maker (whose name I don’t remember) and was made in 1753 – price, a mere 4,500 Euros. Gasp! Needless to say, we didn’t get it.

There’s so much more I could tell about these trips. I’m wishing we could take this same tour again in 2019, but as we’re already booked to go to the Munich Gem and Mineral Show (arguably the largest in the world) in October, two trips to Germany in less than six weeks is a bit much.

Update – perhaps I was not wise in buying my beloved crocodile in spite of the fact he is wonderful, very beautifully made and has a distinct personality. However, there has been some difficulty in my stuffed animal collection since his arrival and I have had to isolate him on my desk. See what I mean?