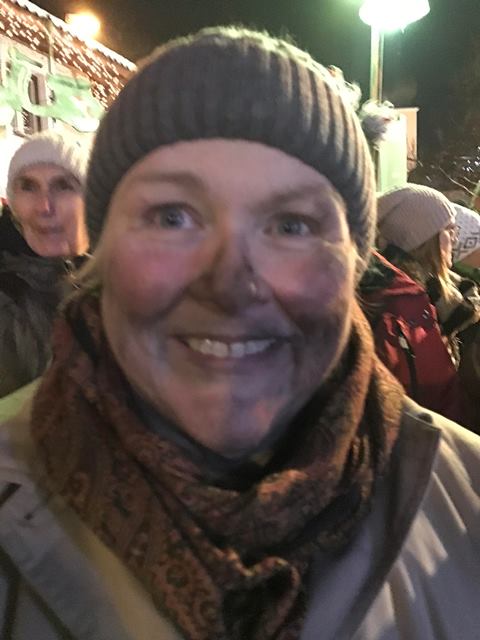 I had never been to a German Christmas Market, so when in early fall of 2017 The Husband mentioned a tour being led by a friend of his I was enthusiastic. We signed up immediately, finally flying into Stuttgart for a seven day, seven city tour of southern Germany and Bavarian Christmas markets. I wore the same clothes and coat I had when I went to spend Christmas with The Husband during his posting to Landsthul, but forgot something important – when I visited before, we went from building to car and from car to building. We didn’t stand out for hours in a rainy/drizzly/snowy night in a below freezing temperature! I thought I would turn into a popsicle! Thank God for gluhwein! Gluhwein is a traditional spiced wine served with or without additional liquor and served barely off the boiling point. It’s great anti-freeze for humans, but you have to drink it quickly or it gets cold before you can finish it. I quickly became a connoisseur of gluhwein!

The first night we didn’t go to a market, but to a Krampus parade. I had never heard of a Krampus, but apparently it’s a big thing in a number of places around the world. Krampus is the ‘dark side’ of St. Nicholas, the one who takes care of the bad children. There are Krampi clubs, sort of like the New Orleans Mardi Gras krewes, and they hold parades all over southern Germany. The Krampi are covered in long shaggy hair – even their hands – have truly demonic faces (the masks, though horrifying, are really works of art) and horns sometimes as long as they are tall. Some drive “Mad Max” type cars that shoot fire and smoke. I don’t know why the children don’t have nightmares, but they love the Krampi.

No one warned me about the Krampi. That they touch you. According to whomever you’re talking to if you’re touched by a Krampus you’re either damned or saved. If they touch you twice, it’s doubled. No one said what happened if you interact with half a dozen of them. Early on in the parade a Krampus came over and grabbed my face and wouldn’t let me go. No one had warned me this might happen, so my fight or flight instinct kicked in. I struggled, and he held the harder (this took just seconds) and he simply would not let go.

Reader, I bit him.

He turned loose (quickly!) and went on. I don’t know if they could communicate with others in the parade or not, but after that I was besieged by Krampi. One kissed me – with his hard plastic mask, which was weird. One danced with me, twirling me around – all with a crowd barrier between us! Two or three others used their switches on my legs (only ceremonially, I could barely feel the touch through my jeans) and two or three others came and touched me. One even brought me a piece of the hard candy they were throwing to the children, presenting it ceremonially with a deep bow suited for a royal court.

Before it was over some of the women on our tour – who had all been completely ignored – were muttering about pheromones. I still don’t know how to take that.

I swear I took several photographs of the Krampi, but cannot find a one on my camera or my phone. Perhaps they really are magic? Anyway, here’s a picture of me after the parade ended. Neither did anyone tell me that the Krampi’ gloves are permeated with soot. Dark, greasy, almost-impossible-to-remove soot. I had to scrub my face four times – hard – before getting it all off! The Christmas markets were delightful, but varied only in size. There was a lot of ‘Christmas junk’ – ornaments in everything from glass to fabric to straw, linens, some toys (mainly traditional, very little plastic), scarves… and food. It seems that two of three booths were something to eat or drink. Long live gluhwein! And bratwursts. They sell a half-meter long brat in a bun the same length. No relish, no sauerkraut, mustard only sometimes. Still, a half meter! I was glad brats are only as big around as my thumb! There were marzipan stalls too, with more kinds of marzipan – and dried fruits and all kinds of candy – than I knew existed.

The markets are just hut after hut, either free-standing or linked together – all decorated with traditional Christmas holly and snowmen etc. And everywhere – in the cities proper as well, away from the markets – there were signs saying Merry Christmas in both English and German. I found it refreshing. Merry Christmas instead of the sickening but politically correct Happy Holidays we’ve had forced at us over here.

In Nuremburg the market was quite large and one area was called the International Christmas Market. We were delighted to see a stall called Houston, Texas selling exotic cans of chili, bags of tortilla chips and jars of jalapeño peppers! The vendors, however, were from Amsterdam!

During the day we would drive in a Mercedes minivan from city to city, stopping here and there to see interesting things and on one occasion to visit some relatives of our guide – who is not only a retired physician but a retired USN Admiral! There were six of us on the tour, plus our guide, which made a lovely group. Once we hit a city and he showed us where the market was, we were on our own so we could do what we liked.

In Essengen there was a medieval Christmas market, with everyone dressed in medieval clothing, with games and food typical of the period. I especially liked the miniature trebuchets, which you could fire and ‘take’ a wooden painted castle with bean-bags, but my favorite was the mouse roulette. Unfortunately, it was so cold and sleety and rainy and miserable the mouse wouldn’t play, and as we were both soaking and freezing we left. In the real medieval town of Rothenburg we stayed inside the city wall in a hotel that was begun in the 1400s. Yes, it had been modernized very nicely! The Husband and I walked part of the town wall and explored the old city center, but we missed seeing the torture museum, as it is open very infrequently.

Every night we were in a different hotel, each very close to the market (except the last night, in Stuttgart) and all very different but all charming. And small. Some very small, tiny enough that sometimes it seems the room was wall-to-wall innerspring. But – at every one part of our stay was breakfast, and the German breakfasts are superb! There was always the normal breakfast stuff – eggs, bacon, sausage, etc. – but there was also a tray as big as a card table of varied breads and rolls.  There was fresh fruit and goat’s milk yogurt and an incredible variety of deli meats and cheeses. And my personal favorite – smoked salmon. I adore smoked salmon! Most places had a customer-operated coffee machine so you could have all the expresso, latte or cappuccino you wanted. One place even had chicken nuggets! For all the other meals we were on our own, and we usually ended up skipping lunch and eating from the various food stalls in the market at night. I did get slightly tired of bratwurst!

Here are just a smattering of pictures (don’t want to crash the site!) but hopefully they will give you a bit of the German flavor. I’d like to write more about things we saw, especially our visit to Mad Ludwig’s Neuschwanstein palace, but just thinking about it makes me lose my breath. You have to climb a mountain and then five long flights of stairs before you can even start the tour. It was worth it, though. It really was.

Did I tell you we’re going back next year?