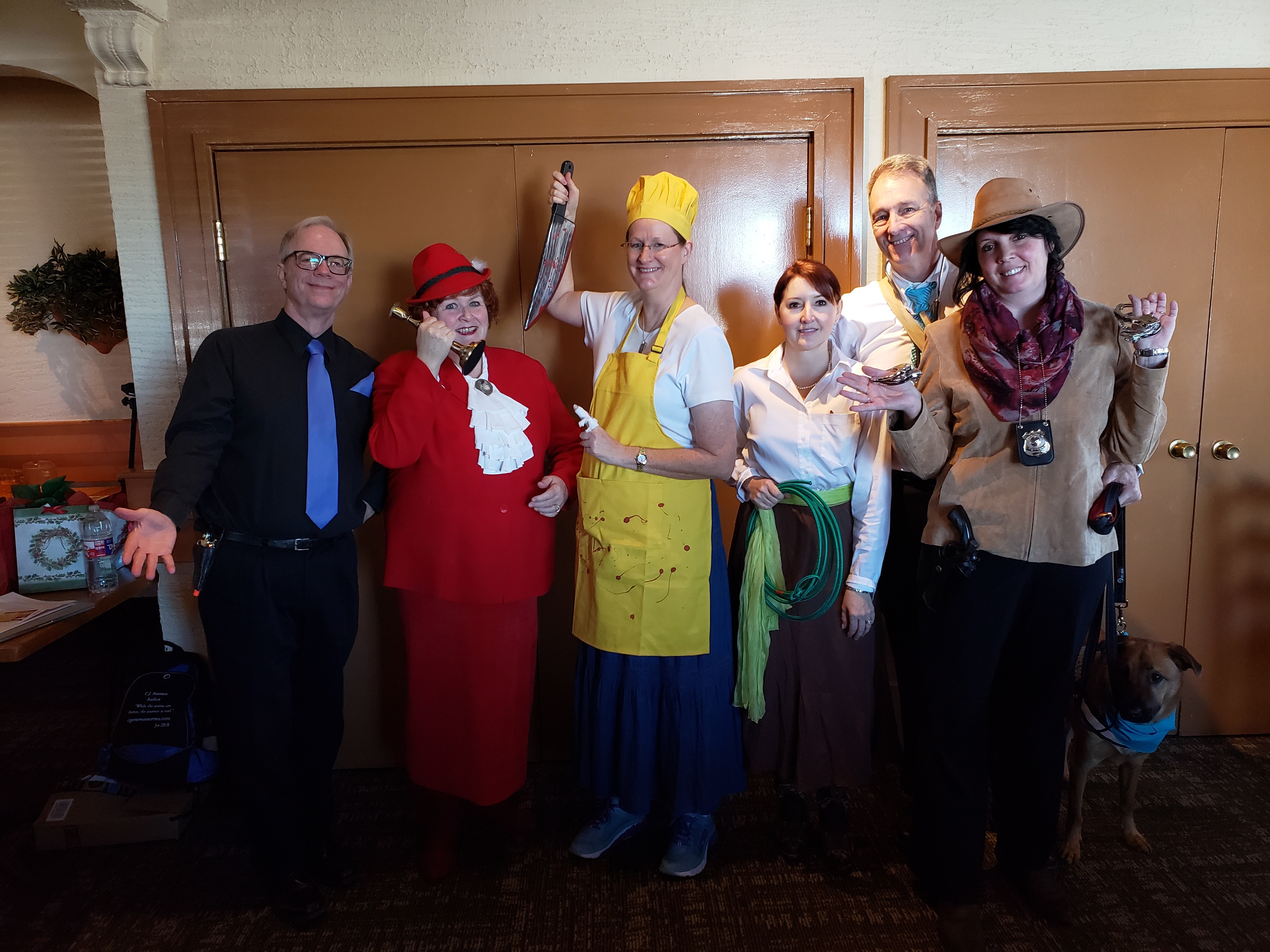 Instead of doing a party or a program this month, our local Mystery Writers of America group did a Murder Mystery Lunch. As I had once unwisely admitted that I had done some acting years ago I was drafted to play one of the characters – a nosy, somewhat abrasive newspaperwoman named Chris Crimson. All the characters were named after colors, and each had a favored thing (mine was a candlestick, of all things) that could have been used as the murder weapon.

Although since it has been decades since I’ve memorized a script I had an unexpected amount of difficulty committing it to memory. A hard deadline, the onrushing holidays and a Family Situation will do that to you! And I admit, I cheated. As my character was a journalist, I kept a reporter’s notebook in my pocket with the script in it and whenever I went up on my lines I’d have to ‘check my notes.’ However, the audience was very forgiving and it was a lovely romp!

As my character’s name was Chris Crimson, the organizer said she’d bring a red scarf to underline my name. A scarf? Really? I went rambling through my closet and came up with a definitely period-non-appropriate outfit (the play was set in the 1890s) but it was indeed red – red boots, long red skirt, red blazer, red hat and my currently red hair. White blouse though – no need to be obsessive. <grin> The organizer took one look and put the scarf away. (And it wasn’t red, not really – more of a light burgundy color.) The costume was a total mishmash and I’d never voluntarily wear it on the streets, but it was indeed RED!

Here’s a snapshot of the cast in all our various colors. About my red hair – I just have to tell this story. At my vet’s the other day this sweet child who works the desk (very early 20s) whom I’ve known for about a year saw me for the first time with red hair. The last time we met I was a blonde. (No, I’m not quite a member of the color-of-the-week club, but I do like to change it up periodically and I’ve always wanted to be a redhead!) She told me she loved my new color, so – making a joke like I do about nearly everything – I told her I had had a bad attack of the Maureen O’Haras. Everyone else in the place laughed, but she had the most incredibly blank look on her face and you could almost hear her thinking. Then her face cleared and she said, “Oh, she was in Gone With the Wind, wasn’t she?”

That was one of the few times in my life I was completely speechless. I guess now I’m officially old.

If I don’t get to write again before the holidays – and I know I’ve been terrible about keeping this website current – I want to wish everyone a Merry Christmas and a Happy New Year! (And speaking of Christmas, my new Christmas- themed mystery novella is now out. It’s called KILLING HARVEY, and it’s about a snow-bound family mansion where the most obnoxious family member is found murdered on Christmas morning. He’s been stabbed. And garroted. And possibly poisoned. It’s really quite funny!)