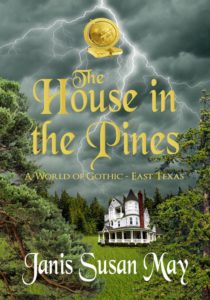 THE HOUSE IN THE PINES, is a  gothic novella is set in the woods of East Texas.

Hired to write the biography of elderly tycoon Henry Wolfe, Dianne Grayson happily comes to Wolfe House, a Victorian mansion set deep in the piney woods of East Texas… a house she has always wanted to see. Henry Wolfe is just as autocratic and overbearing as she expected, but no matter how he acts she is determined to stay there until she gets the answers she wants.

What she did not count on was his rugged grand-nephew and a startlingly handsome and attentive young cowboy, both of whom show great interest in her, nor how the mysteries of the past can affect and endanger the present day.

Once she discovers the truth, is it too late for her to save her own life?

Pamela Thomas says “I chose this book because I know Janis and have read several of her novels. There seems to be a little bit of Janis in her books and this one was no exception. This book is written so true to the Texas I’ve come to know and love for the last 30 years, it’s easy to slip inside of the Woods and spend a few hours with willfull women, wild weather and wicked. . . oops almost said too much. I enjoyed the read. ”

An extract from House of the Pines

But there was something I wanted to do first. Instead of going to my room, I went to my mother’s. The door was still unlocked, the drapes still drawn. I turned on the light, then closed the door behind me. Since my secret had never really been one, surely there could be no objection to my going inside; there was no need to be secretive any longer.

The whole room was almost heart-stoppingly beautiful, yet soulless. All evidence that this room had once housed a vibrant girl had been siphoned away, leaving nothing but a pretty shell, like a department store display, or perhaps a movie set. Something static and artificial. It was hard to believe that anyone as vibrant and alive as my mother had ever lived here. It seemed she should have left some imprint of her energy, her personality on this elegant, sad room.

There was nothing. Even the portrait, while a masterpiece of the portraitist’s art, was the same, lifeless and soulless, yet so lifelike that I found myself willing it to speak. There was so much I wanted to know, questions I had not known to ask when it would have been possible – not that she would necessarily have been willing to answer.

One by one I opened the drawers, but aside from some floral paper lining they were empty. So was the closet. Two large suitcases, a matched pair, huddled lonely in a corner; they too were empty. On one side of the vanity top were a fancy silver brush and comb and a matching bottle obviously meant for perfume.  On the other was the ornate jewelry box that had reputedly once belonged to an Italian princess. Mother had described it to me often when I was a child – I had been fascinated by the idea of a box being an intricate puzzle of drawers, false bottoms, and hidey holes. I knew where all of them were, but it didn’t make any difference. The box was completely empty.

So not only was the ring missing, but so were her mother’s diamond earrings that had become hers on her sixteenth birthday, and the strand of pearls that had been her grandmother’s… Even her Girl Scout pin was gone. It was as if the entire box had been vacuumed, for not even a shred of dust collected in its corners. I could have wept to find that the hidden switch to the false bottom of the chest was broken; it hurt to know that this beautiful thing that had lasted over several centuries was wounded. It hurt almost as much as finding my mother’s jewelry gone.

An empty vase of exquisite porcelain rested on top of the lace scarf that covered the chest of drawers. A crystal water jug and glass sat on the pristine nightstand beside a delicate if somewhat impractical lamp. The bed itself was covered with a pale lilac spread, but there were no sheets beneath it.

There was nothing of my mother here.

If only the walls and furniture could talk… If the portrait… I looked at it, willing it to speak, to impart something, to acknowledge me in some way, but it merely hung silent and serene, looking over my head into nothingness.

There was nothing here to keep me, not in this room, not in Wolfe House. Turning off the light, I peeked out, making sure the landing was empty before I slipped out to my own room. I hadn’t closed the curtains before going down to lunch and was astonished at the change in the weather just in the time I had been in my mother’s room. The low, dark sky had intensified, until it seemed that the clouds would catch on the roof, and it was dark enough to be almost night instead of mid-afternoon.

I had intended to start packing, but I was startled to see that my luggage was gone from the corner, and that my laptop was no longer on the desk, nor my nightgown on the bed. The reality was astonishing. Where had everything gone? I gasped, and that tiny sliver of time sealed my fate.

I had been stupid. It never occurred to me that if I could walk soundlessly over the wooden floors so could someone else. The blow that glanced off my skull sent me down in a whirlpool of swirling blackness.