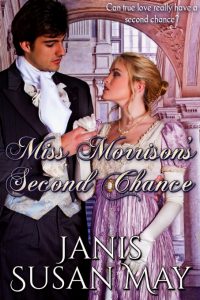 Second chances are often the best. Twelve years ago, long-time sweethearts, Verity Morrison and Bradford Pemberton, were torn apart by a vengeful act of Verity’s jealous sister. Refusing any other suitors, Verity has descended into spinsterhood at the family estate, her heart broken. After being disgraced and exiled to foreign lands, a now wealthy Bradford has returned to England in order to get to know his nephew, Charlie, better. He’s quite surprised to run into Verity who is chaperoning her niece. Their feelings are as intense for each other as always, but Bradford believes Verity long married and Verity believes Bradford is under her sister’s thrall. Neither bothers to correct the other. It takes a kidnapping, an unexpected rescuer, and mistaken identities to prove that true love does indeed deserve a second chance.

“A trade?” Verity asked blankly. “What do you mean?”

“Would you, as a responsible relative, like to remove Lisbet from Catherine’s house and bring her here under my sponsorship? Dear Francis’s fortune is perhaps not as large as Ephraim Conover’s, but I daresay our reputation is more respectable than Catherine’s.”

Verity drew a cautious breath. Annabelle of old had been a schemer with a ruthlessness born of a determination to do something for one’s own good whether one liked it or not; doubtless the years had made her more so. “You are making  an extremely generous offer.”

Annabelle laughed, a rich full sound which was in decided contrast to her frail appearance. “You should see your face, Verity. Right now you are asking yourself what do I want in return. Do not scruple to deny it; your face is as transparent as it ever was.”

“Well, what do you want in return?”

“You,” she said simply. “Oh, Verity my dear, do not look so shocked. I have not gone in for slave trading in my later years, I assure you. It is just that Francis and I have decided you have been buried in the country long enough. You are still a very attractive woman and there is no need for you to live out your life as a spinster. I am offering you a sort of second Season. You will stay here with Lisbet and me, and we shall see what the Ton has to offer. Would you not rather have a chance to be mistress of your own establishment instead of being an antidote in Percy’s?”

Miss Morrison gallantly fought down ancient day dreams of being chatelaine of Bittermere. “Have you and Percy been comparing notes?”

“No, my dear; we both care for you and want the best for you. Now, I have arranged for us to go to the Drummond-Burrells’ musical evening on Thursday—”

“Day after tomorrow?” Verity asked in sudden panic. “But that is too soon…too soon…I am not sure I want…I have nothing to wear…. My clothes are all dreadfully dowdy for Town…”

“We have worn each other’s clothing on several occasions as I recall,” Annabelle said placidly. “I cannot see where you have put on any weight and almost every color becomes you. You are welcome to my wardrobe until you can order new things of your own.”

The day had held too many shocks. An unaccustomed fit of nerves assailed Verity as she tormented her handkerchief. “I must talk to Lisbet.”

“Of course. Shall I send for the carriage?”

“I cannot call at Catherine’s!” Verity’s voice dropped, and her friend looked up in startled awe, needle frozen in mid-air.

“Have you never spoken to her since…?”

“But her visits home—”

“Were very short and very seldom. I kept to my room,” Verity replied tightly.

The pale head nodded. Strong emotion indeed, and sometimes it could be counteracted only by strong measures. “I wondered why you had hidden yourself away so thoroughly.”

“Hidden?” An edge of temper so well remembered from the past crept into Verity’s tone. “Dare you imply I am afraid of Catherine?”

“No, of course not,” Lady Bellthorpe replied meekly.

“Well, I am not,” the ladylike Miss Morrison all but shouted before realizing the masterly snare into which she had walked. “You always were devilishly clever, Annabelle,” she murmured in capitulation.