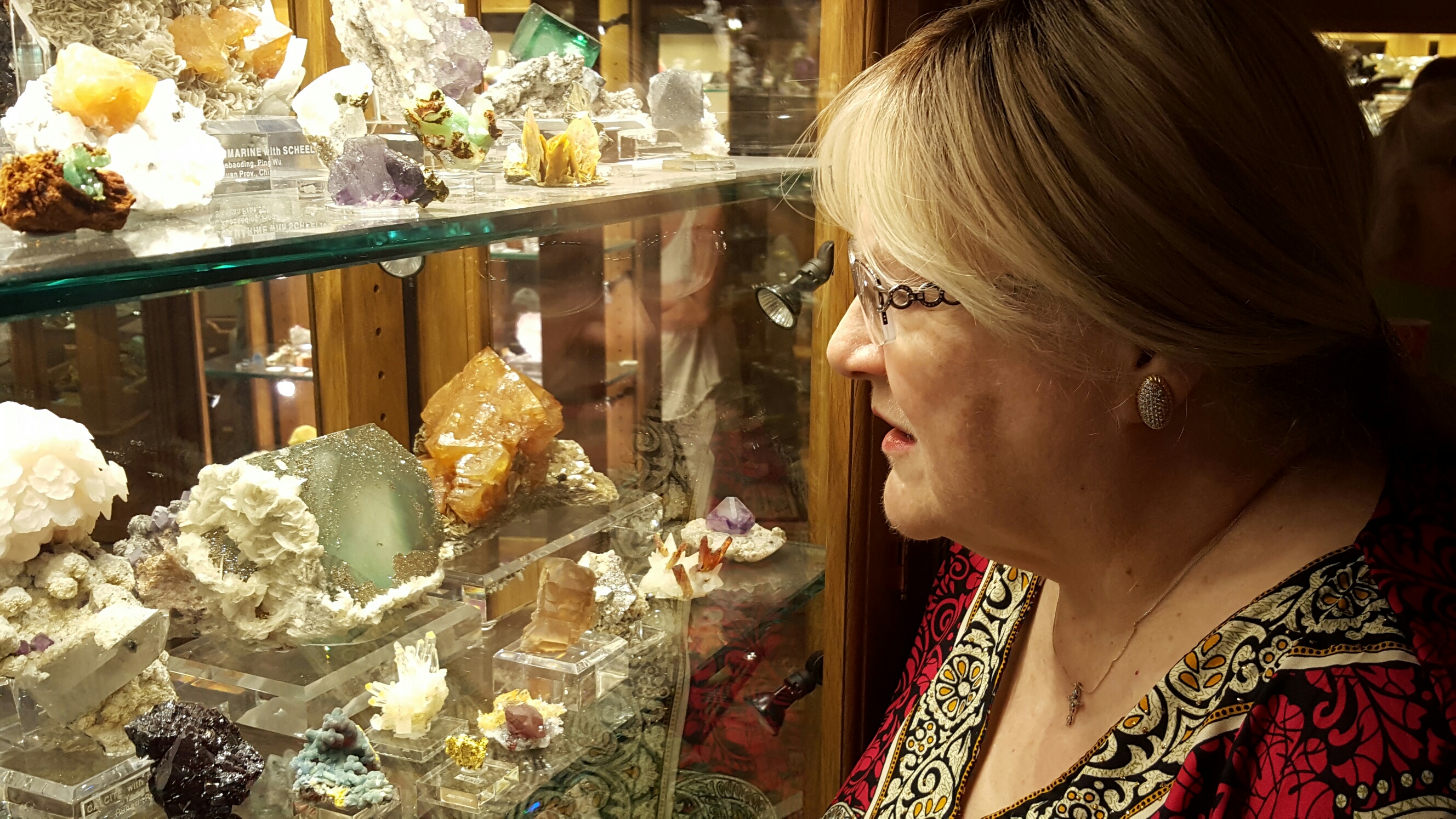 This has been the most entertaining weekend ! The Husband is a mineral collector, and our house is full of mineral specimens, neatly mounted on plexiglass cubes in lighted cases. While I like and admire his collection, I prefer my mineral specimens faceted and mounted in precious metals for wearing, but that’s another story…

We don’t have a large or grand collection, but like what we have and appreciate the collections of others, some of which are simply spectacular. This past weekend was the Dallas Mineral Collecting Symposium – an international event that drew participants from as far away as China and Australia. I’ll admit some of it was over my most-definitely-unscientific head, such as the chemical variations of copper from different locations, but for the most part it was fascinating. Men who have spent their lives field collecting telling of their adventures and successes… and failures. Pictures of places I will never see in my lifetime, and more pictures of unbelievably beautiful specimens, some of which had me drooling.

Part of the symposium was a field trip to the Arkenstone, a gem and mineral showroom not generally open to the public. I can’t say much about it, except that it was absolutely fantabulous. It’s seldom in a lifetime that one gets to see so much spectacular beauty. Our VISA card whimpered in pure terror the entire time we were there, but we managed to escape without buying anything – and considering their jewelry department, that is a miracle as far as I’m concerned. There was this one ring of dark green tourmaline (I think) fringed with diamonds… sigh. Just sigh.

That restraint proved to be a good thing, however, for at the Silent Auction at the closing banquet Saturday night The Husband found a specimen he had been hunting for (don’t ask me what it is, but he got all excited about it) and got it at a very good price.

Another good thing was that our friends Gail and Jim had a brunch at their lovely home for some of the symposium participants and we got to see their wonderful mineral collection. It is beautiful, and absolutely dwarfs ours. The Husband (and I, too) went around glassy-eyed looking at all their wonderful rocks. Especially the large fluorite cube edged with pyrites in this picture – it is absolute one of the most beautiful things I’ve ever seen. Also the ruffly pink rock (and yes, that is a single rock!) whose name I don’t know but is edged with pyrites and looks like a ballerina’s tutu. While at the symposium we got to know a mine owner, a lovely man who is very friendly and a lot of fun. He and The Husband hit it off and while they were chatting during one of the symposium breaks an idea walked into my mind. (Like I need another idea, when I’m already three books behind!) It wouldn’t shut up, so I made some notes and asked him some questions. After his first startlement was over and he realized I was talking about a book plot and not a plan to do away with some real unfortunate, he got into the swing of things and volunteered to answer any questions I might have – unfortunately that won’t be until I actually start writing, but it’s good to know I have an expert on tap.

We had rain this weekend – monsoon worthy rain – and while we needed it badly, I do wish it wouldn’t come in such concentrated doses. When it’s raining so hard you can’t see the expressway signs, and traffic has slowed to twenty miles an hour or so, it’s scary to be out. On the other hand, we couldn’t risk missing any of the symposium, so we put on our waterwings and went. And am I glad that we did!

Now I must get to work and make up for lost time. The new book is shaping up nicely, and I hope to finish it before too awfully long!