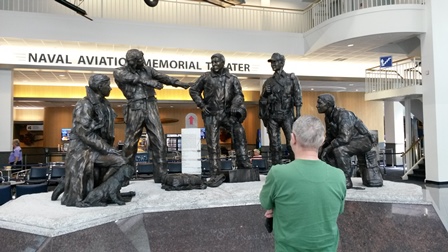 Well, here we are in beautiful Florida. Again. The Husband and I came down to St Pete Beach about two weeks ago to attend the Novelists Inc. conference – the best conference for working professional writers in the world – and enjoyed it thoroughly. More information about that in a later post. Then it was home for a week and back, this time to Pensacola. One of The Husband’s long-time friends (an admiral, no less!) is retiring from the Navy with all proper pomp and circumstance and he wanted The Husband to attend the ceremony.

Yes, I know about the weather. All along the East Coast the roads are clogged with people evacuating from Matthew’s wrath, and here we go directly toward it. However… we are in Pensacola, on the Gulf, and as far west as you can get and still be in Florida. The weather has been wonderful – perhaps a little more cloudy and breezy than normal, but comfortable and beautiful with no sense of impending bad weather.

Tomorrow night there is a beach barbecue, and on Saturday the retirement ceremony itself, to be held in the Atrium of the National Naval Aviation Museum. We went by there this afternoon just for a quick check-out … and ended up staying almost six hours.

You’ve seen a flock of birds take off when startled and the whole sky is filled with birds? Imagine that with airplanes – big airplanes, little airplanes, helicopters, old airplanes – and you have this museum. There are planes on the floor. There are planes hanging from the ceilings, including four Blue Angel jets over the Atrium, parts of planes here and there… and no ropes! Anything you can reach, you can touch.

There is such a wealth of planes there you don’t know what you want to see first. Like the only plane known to survive both the Pearl Harbor attack and the Battle of Midway. The first (and maybe only) Japanese Zero fighter captured by the US.

The Stearman bi-plane trainer flown by George H W Bush when he was the youngest fighter pilot in the US forces. Space vehicles. The only remaining NC plane.

This is the plane – NC4 – that especially captured my imagination. Coming available at the very end of World War One, there were four of these behemoths – 1, 2, 3 and 4. A huge and very strange looking seaplane, the NC4 has a top wingspan of 126 feet. That is 6 feet longer than the entire original flight of the Wright Brothers just about a decade before.

Wanting to use this spectacular technology, in 1919 the powers that be decided to fly the NCs across the ocean. It had never been done. They had no radar, no way of navigation, so it was decided that they would fly at night. During the day they’d land – on the ocean itself if no land were available. The Navy stationed ships every fifty miles or so across the ocean; they would light up with flares or similar, giving the planes something to follow. The trip took 19 days, and only one plane – the NC4 – actually completed the trip across the ocean. Thankfully though three planes were lost, all the crew were saved. If I put this in a novel people would say it was unbelievable, but this really was the first trans-Atlantic flight.

Lindberg, you say? His flight was 8 years later, and it was the first solo, non-stop flight across the Atlantic, but he couldn’t have done it had not the brave crews of the NC planes done it in 1919. And I saw the actual NC4 plane that was the first to fly the Atlantic. Amazing!

If you ever get to Pensacola, do go to the Naval Aviation Museum. There’s more there than I’ve space to mention. It’s a wonderful place.